Impacting the Future by Pointing to the Cross - 781 Main Street, Stone Mountain, GA 30083 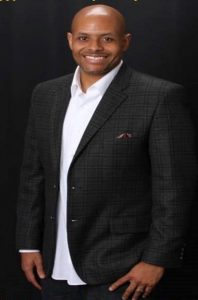 Pastor Eric Cannady is a man of God with a vision for the future. God has placed him in leadership in the Body of Christ for such a time as this. Even as a very young child, the call of God was evident in his life. He was born in Baltimore, MD and was a member of the Refuge Way of the Cross Church. Apostle Leroy H. Cannady, was his pastor. At the age of 11, his father relocated the family to the metro Atlanta area and he has resided there ever since. The family joined the Bible Way Church of our Lord Jesus Christ, under the leadership of Apostle Matthew Norwood, former Presiding Bishop for the Church of Our Lord Jesus Christ. Pastor Cannady accepted his call to the ministry at the age of 22 and worked diligently at Bible Way. He served as Youth President, lead trumpet player, instructor for both the Sunday School Department and Bible Institute, member of pastor’s cabinet and ministry staff, and a member of the leadership team.  He also served the state of Georgia Armor Bearers Young Peoples Union as Vice President.

After receiving the call to the pastorate, Pastor Cannady began to make the transition back to the Way of the Cross Church of Christ, Int. and began working closely with Bishop Earley Dillard of Martinsville, VA. Bishop Dillard served as a pastor and mentor as the plans were being developed for the new ministry.  God has given him the honor and privilege of working with three very fine pastors who have provided a wealth of knowledge and wisdom.  These men also placed a lasting impression on the value of serving the Lord from your heart.

On June 9, 2002, by the leading of the Holy Spirit, Bishop Cannady opened the doors to the Atlanta Metro Way of the Cross Church of Christ. For the first nine months, the church used a meeting room for worship services on Sundays at 11:00 am. Filled with a desire to have a separate worship facility, Bishop Cannady, believing God, signed a lease for a new store front facility to serve as the first sanctuary for Atlanta Metro.  The first service was held on March 23, 2003 and the building was located on 4600 Rockbridge Rd., Stone Mountain, GA 30083. Then, less than two years later, on December 6, 2004, (First Lady Cannady’s birthday) God blessed Atlanta Metro to close on their current facility. The address is 781 Main Street, Stone Mountain, GA 30083. Pastor and congregation took a leap of faith and the first service was held on Sunday December 19, 2004. This church building has a sanctuary that will seat 400+, chapel, fellowship hall, administrative offices, computer lab, and more.  The adjacent property has since been purchased and the building serves as the H.O.P.E. (Haven of Personal Enhancement) Center.  It includes the banquet hall, music room, memorial room, and gym.

Pastor Cannady earned a B.S. Degree in Finance from the University of Delaware and a M.B.A. degree from Brenau University. He has taken courses at the Apostolic Christian College and the Academy of Christian Counselors. He has been certified as a life coach through Atiras International. He is a lifelong learner and plans to earn a doctoral degree in Organizational Leadership. 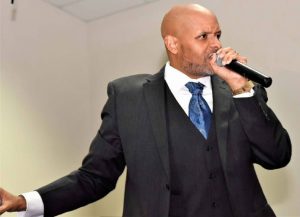 Pastor Cannady was ordained an Elder in the Way of the Cross Church of Christ, International in August 2001 at the 57th Annual Holy Convocation in Norfolk, VA. In August of 2007, during the 53rd National Youth for Christ Convention, Pastor Cannady was elected to serve as the 2nd Vice President for the National Youth for Christ division of the Way of the Cross Churches of Christ, Int. In August of 2008, he was elevated to the position of District Elder over the state of Georgia churches.

On August 3, 2012, during the 68th Annual Holy Convocation in Arlington, VA, Pastor Cannady was consecrated to the sacred office of Bishop.

On January 1, 2018, Pastor Cannady officially changed the name of the church to Rock Stone Church.  Same vision, new direction!  This is the Lord’s doing and it is marvelous in our eyes!

Pastor Cannady is married to his love, the former Tonia Dillard of Martinsville, VA. They have been blessed with three beautiful children, Lincia, Christian, and Ashton.

He believes in serving the Lord with humility and remembers the importance of love in ministry.  He keeps Romans 5:8 close to his heart, “But God commendeth his love toward us, in that, while we were yet sinners, Christ died for us”!